Self Publishing A to Z: QUITTING (GIVING UP)


Welcome to the Trogloblog--for April, I'm participating in the epic A to Z Blogging Challenge, where Monday through Saturday, I'll be posting a letter-themed article about Self-Publishing... 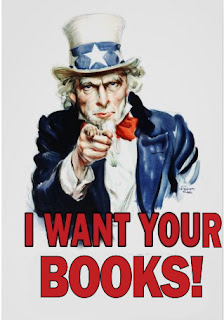 Throwing in the towel. Giving up. Surrendering. QUITTING. You've considered it. Watching that sales graph at KDP just sitting there, taunting you with it's lack of movement. Or maybe it was that scathing one star review from Libby Treehugger. Or the fact writing is cuting into your X-Box time.

Whatever the reason, if you're a self-publisher, and have been for any amount of time, you have undoubtedly considered giving up. Don't.

In the old days when Harper Collinstone chiseled out scary masterpieces like "To Kill a Mosasaur", authors had to beg and plead with Agents in the form of a quey soaked in goat's blood, penned in a mystic circle under a full moon. Getting published not only took the Luck of the Irish, it also meant you had to appeal to the right person at the right time with the right material. Getting struck by lightning underground would be easier.

We live in a glorious age of screw-the-dinosaurs, where we don't need no stinkin' agents or those Reptilian Publishers. We can appeal directly to the masses, sharing and wit and wonder with any who would care to read it. These are glorious times...

You may think no one likes your book. No sales and one-star reviews from literary trolls might seem to indicate that. But don't forget there are millions of readers out there with shiny Kindles, Tablets and smartphones. Someone will like what you write, typos and gauche style all the same.

DO NOT GIVE UP. Quitters give up. Winners keep on going. As long as you aren't forgetting to feed your children, spending more money on book doctors than a crack addict on a dealer, keep on going.

It's like a lottery ticket. If you don't play, you cannot win.

All this being said, I'd like to point out something very important... just because someone else has achieved total victory with their first book, doesn't mean you will. (See my earlier article Heroes of Self-Publishing). Success is never guaranteed. So DON'T QUIT YOUR DAY JOB!

Quitting should never be an option. Don't quit writing, don't quit learning, don't quit that steady day job while you wait for success. Write because you like to, and because you'd like to get paid for your craft. If you work hard enough, often enough and just hold on, maybe some luck will com your way.

Posted by Troglodad at 8:11 PM