THE GREAT HOPE-A-DOPE HYPE
Man, just when I thought I couldn’t take any more "change" talk from Osama Barack, now he won’t shut up about "hope".
Is this guy a politician or a broken record? He’s got more double talk and empty speeches than... well... A wrassler.
In fact, as I think about it, that’s who Osama reminds me of- a smack talking wrestler, but without the yelling. Or maybe a boxer. And this train of thought led me to the great Muhammed Ali.
Here was a guy who talked some smack, but did so calmly and quietly, without a lot of rage. Ali was all class.
So now I’m confused. All this time I thought Osama was channeling his inner John Kerry- he uses the same gestures as Kerry when speaking. (Funny, I was always taught NOT to talk with my hands). But now I’m starting to see his inner stinging- butterfly coming out. Yep, there it is, Osama is ripping off Ali.
Think about- Ali protested the war in Vietnam by throwing his Olympic medal into the Ohio River. Quiet defiance. Osama likes to not put his hand over his heart during the national anthem. Again, quiet defiance.
Ali is famous for his rope-a-dope- a strategy of laying back and waiting for an attack, so as to conserve energy. In other words, Ali let the other guy do the fighting, then finished up.
Osama’s doing the same thing- he’s spewing out his constant rhetoric about "Change" and "Hope" without really saying much of anything. Meanwhile, Hellary and Haircut Edwards went out and worked it, talking about what they would do, what their policies were... sounding just like politicians. People are tired of hearing empty promises. Nobody believes ANY politician when they say they’re going to do this or that.
And therein lies the genius of the hope-a-dope. Osama’s just spewing out nonsense, totally unrelated to the issue at hand. He’s droning on, just to let people hear him talk. And of course, in our starry-eyed, celebrity-worshipping society, talk like that is working. Since Osama isn’t talking politics, people like to listen to him.
But I got news for Osama- He’s no Muhammed Ali.
John McCain said it best- "I will fight every moment of every day to make sure Americans are not deceived by an eloquent but empty call for change."
That’s right Osama, McCain may not be the Rock, but he can smell what you’re cookin.
ADDENDUM: I really should have researched this better. Turns out a LOT of folks have branded Osama a Hope-a-dope.
http://www.huffingtonpost.com/tag/hope-a-dope
Oh, well, great minds think alike. I'm just glad that so many are seeing through his empty talk.
Posted by Troglodad at 9:33 AM No comments: 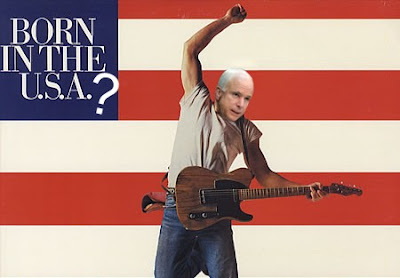 BORN IN THE USA?

Okay, did I hear right this morning on the news? Someone is challenging whether or not McCain can run for President, because he wasn’t born within the physical confines of the continental United States?
Oh, good grief.
John McCain was born on a US Military Base in the Panama Canal Zone, August, 1936.
To American citizen parents.
That makes him a natural born citizen!
Don’t believe me, check out current U.S. Code:
http://www4.law.cornell.edu/uscode/html/uscode08/usc_sec_08_00001401----000-.html

WHY CHILDREN SHOULD AVOID STRANGE TALKING CARS
(A Review of Knight Rider-2008)
Well, if it wasn't bad enough that we have to warn our children to avoid strangers, now we have to make sure they aren’t going to watch NBCs latest offering of "Knight Rider".
Yep, the classic cheese of a talking, black Trans Am piloted by pre-lifeguard David Hasselhof has been remade for a new century. As a Ford Mustang.
While I wasn't very impressed with Knight Rider in my youth, I did watch the show every week. It was scifi and there just wasn't that much else on TV back then. By today's standards, with 100-plus satellite channels and my Xbox 360, I have a lot better to do with my time... Except I do loves me some TV cheese.
So there I was, Sunday night, February 17, 2008, watching the pilot for the new Knight Rider series on NBC. With my eight year old daughter.
I should have known better.
Okay, NBC made the series a sequel, and not a "reimagining" like the gender-bending Battlestar Galactica on Scifi Channel. (Yes, I'm still mad about Starbuck being a chick) That's a good start.
And KITT is now the Knight Industries 3000- an upgrade from the previous 2000 model (and yes, it seems this is indeed a new KITT). I got no problem with that.
Michael Knight? Well, the Hoff makes a cameo at the end of the episode, and (SPOILER WARNING) the new driver, "Michael Traceur" is apparently an illegitimate offspring of Knight. And is a former Army Ranger. Now we're gettin’ cheesy. But cheese is good- you can't make nachos without it.
And KITT? He's now voiced by Val Kilmer! The Iceman doesn't bother me at all. William Daniels shouldn't have to look to hard for work Elsewhere, and he was getting a little old. And it was Michael Keaton who declared "I'm Batman!" Not Val. I am curious as to why Kilmer's casting was kept Top Secret for so long though. Maybe the Hoff didn't like being upstaged by a bigger actor than himself and tried to put some HEAT on the produers. The Hoff hasn't been a Saint lately- I'm sure he wouldn't be above that.
So far so good. Until we got to the scene where Michael Traceur's roommate/obligatory pencil-necked geek finds him in bed with two hot chicks (Seriously, one is actually credited as "Hot Chick" in the credits. Got to www.imdb.com if ya don't believe me).
Alright, the Hoff's Knight was indeed a manwhore- but it was implied. I don’t recall him ever rolling out of bed with some tart like a wannabe James Bond. And speaking of 007 I don't let my 8 year old watch Bond movies either. I just don't think sex is a topic a child needs to be seeing or discussing in any form.
If that wasn't bad enough, we also get to meet sweaty FBI agent Rivai jogging on the beach. She then has a quick scene where she rinses off her body- obviously meant for 13 year old boys who get excited at the sight of even scantily clad girls. But worse, Rivai goes inside and we get to see she's also a whore; her one night stand is still in bed, clearly nekkid (but partially covered by sheets) and comments about wanting breakfast. And she's a hot blonde. Not Rivai- her "date". Yes, NBC has once again worked homosexuality into a show. Maybe they'll rename the show "KITT and Grace"?
In checking a fansite, I saw a variety of debate on the whole lezbo/manwhore issue. Several dedicated fans pointed out the show did have a rating indicating sexual content. But really, who reads that? I don't get the paper or TV Guide. I saw commercials, had the wife set up the DVR to record the show, then watched about 15 minutes behind the real time broadcast.
And thank goodness I did. In this modern day and age, DVRs are a parent's best friend. When homos, sex or other TOTALLY INAPPROPRIATE matter surfaces in a show, you can just skip ahead, like with DVDs. No need to corrupt your impressionable child(ren) with perversion.
And that's another point the fans make- why should children be sheltered? Either those who say that are pedophiles themselves, or they don’t have kids. Every parent knows if it isn't something shown on Nickelodean or the Disney Channel, it IS NOT child appropriate!
But how about the show aside from NBCs modus operandi of injecting sex?
Well, aside from those with a severe case of nostalgia going on, it’s pretty much crap. Cheesy lines, transparent plots, fair acting and some really lame CGI. A perfect show to watch with your kids- minus the sex stuff.
Oh, and if I’m going to blast NBC for the sex, I guess I should congratulate them for toning down the violence. In particular, a motel clerk gets murdered in cold blood, but it all happens between scenes. Kids won't actually see any shots being fired at the clerk or his brains splattering. And when a female character is later killed, the squib on her chest is very minimal. No John Wooish explosions of blood and gore when she's hit by a bullet. She dies slowly, with only a little blood.
So there it is, a show only a kid- be they young or old- would like, that has NBCs trademark, completely unnecessary sex and homosexuality injected to draw a rainbow audience.
And there is indeed something wrong with that.
Posted by Troglodad at 12:36 PM 1 comment: