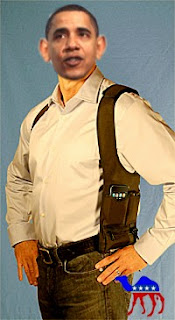 WHERE ARE ALL THE REAL MEN?

I'm feeling a little lonely here. Like I'm the last real Man in America.
I’m talking about the e-Volve Gadget Shoulder Holster I just read about. It's the straw that broke the camel’s back. Or maybe wrapped it in sissified, purse-ified comfort.
The Gadget Shoulder Holster, or "dork purse" as I'll call it, vaguely looks like some kind of undercover shoulder holster for a handgun. But it’s a purse. Or maybe a bra with a side pocket.
And it's gotten me thinking. Has Mankind sunk so low?
Where have all the real men gone? Why am I surrounded by an America full of panty-waisted, metrosexually confused twerps? Look at the Presidential election for God’s sake! Obama is a pencil-necked geek. The toughest thing he’s ever faced in his life was a spoonful of crack. John McCain on the other hand was a bad ass Navy flier, who was beaten and tortured for five years to the point he can’t even raise his hands over his head. And yet he still campaigns and runs for office at an age when he should be retired, sitting on the beach sipping a cool drink and watching the ladies.
What is happening to America? Forget the left-leaning nazification helmed by the Devilcrats. What about the virtual castration of our male populace?
I'm not exxagerating people.
How often are you in traffic and you notice that the car ahead of you has no driver? You shake your head, realizing that KITT is a Mustang on NBC, not the rusted beater ahead of you, and then you finally notice the tuft of hair sticking up in front of a headrest. You think for a moment, "look at that little old lady." Then you see it's a dude! A dude so frickin’ short he can barely see over the steering wheel.
Or take all these Viagra and Cialis and other plumbing medications for men we see on TV all the time! C’mon! A real man wouldn’t whine about his manhood. Nor would he jump up during a commercial and announce "Hey! I need some of those pills!" I mean, who are these advertisements for?
Look around you carefully and take note of the men in your life. How many drink diet coke? How many go to a hair stylist instead of a barber? How many will admit to pedicures?
Do you think some pink-shirt-wearing, pedicured, purse-carrying, diet-coke-drinking, Weight Watchers-eating band of sissies could have defeated the Nazis in World War II?! Can anyone reading this imagine their grandfather worrying about the fat content of a cheeseburger from McDonald’s, or wearing black because it’s slimming?
I should have seen this coming. I mean, I’m a student of history. I remember when fanny packs came out. People called those purses. And what about body sprays for men, instead of just cologne? Penny Loafers. Izod shirts. Light Beer. Xena.
Our male population has been reduced to a herd of geldings. There are no bulls left. Just little twerps worried about their looks, their fashion and their health. What a bunch of girls.
A real man wears his phone in a holster on his belt, next to his gigantic pocket knife. Or carries it old school, in his pocket with a massive set of keys and a couple of dollars worth of change. Throw in a couple of nuts and bolts, a drill bit and maybe some beer tabs- remnants from that DIY project around the house the weekend before.
A man’s pockets should be like the junk drawer in the kitchen, containing a little bit of everything. You thrust your hand in and wince as sharp things pierce your skin, then you pull out a handful of shrapnel and transfer it to a new pair of pants. You don’t organize your belongings in a shoulder-slung, multipocket contraption made of fine leather that matches your damn shoes.
Oh, sure, the manufacturer probably thinks guys will buy it so they can look like Dirty Harry, whipping out their iPhones to call 9-1-1 at the first sign of danger. What, are you five? If it isn’t concealing a weapon that can actually kill someone, it’s a frickin’ purse.
Might as well start speaking French- they’re all a bunch of socialist, purse-carrying sissies too.
Posted by Troglodad at 1:55 PM No comments: