June 25 and 26th, 2016 has once again found me participating in the local Comic Book convention, Derby City Comic Con.

To clarify, I don't do comic books. That is, I don't write them, draw them, or ink. Heck, I barely read them these days. But that didn't stop me from joing sellers of soap, shot glasses, Chinese weapons, jewelry, or Renn-Faire refuse in hawking my wares in a booth of my own.

And if you're like me and curious about the numbers, here's the low down on the experience...

DCCC changed ownership last year. But that didn't seek to affect the show. In fact, it seemed remarkably like the last few years. I think this was my third time as a vendor, fourth or fifth time just being there.

Hosted at Louisville, Kentucky's International Exhibition Center in Downtown Louisville, the show had ample floor space as always. Which meant a crap-ton of booths, less than half of which seemed to have any real connection to comic books. And of those, about half had actual comic books. Or less.

That doesn't mean it's not a fun show. There was a 1967 Chevy Impala, done up like "Baby" from Supernatural, complete with a weapons-laden trunk that would do the Winchester Brothers proud. There was also a super-cool 1989 Batmobile there as well. For only $10, you could climb inside and get your picture taken. I was sorely tempted, but given my six-foot, five-inch, 300-plus pound size, I was worried I might break something trying to get back out (something of the car's or my own).

The vendors this year offered a plethora of popculture paraphenalia, from Funco Pops (although no B-9 Robot) to a slew of Japanimation stuff I couldn't identify.

I was but one of many authors, sitting at my booth, watching people pass me, uninterested in seeing my wares. Many of my fellow authors later lamented this, remarking that "sales were slow". If you then pointed out that attendance was good on Saturday morning, the standard response was invariably that "yeah, but they weren't buying anything."

I disagree. People were buying a lot. I saw them carrying plastic bags crammed with goodies like a cosplayer squeezed into a furry suit.

And yes, there were a lot of cosplayers, of varying degrees of skill level. From those wearing pieces of Halloween costumes, to full blown, hand-sewn masterpieces. I'll admit though, that the great cosplayers were few and far between this year, driven away no doubt by the countless teens wearing red and white long sleeve t-shirts, over-sized black sunglasses and short-haired blonde wigs. I still don't know what the hell that costume is from, but if anymore people wear it, it's going to become the official uniform of the DCCC.

Of course, I also had secondary expenses. $25 for a banner from Staples. $10 for new business cards (they do run out sometimes). $100 for some print editions of my latest books (A Cold Dark War and Outlaws of Olympus). That brought the total to $218.00.

Fortunately, I live nearby, so there was no hotel or appreciable travel expenses.

I came home with more books than I sold, too, so I assume I can deduct those as well... I think it's $75 worth of print copies remaining.

I didn't talk to that many folks this year, so I didn't have anywhere near the bookmarks handed out, or pinback buttons (all left over from last year, I'll note). I made four new readers, hopefully, but sales as yet online don't seem unchanged.

Did that $19.00 accomplish anything? Probably not much. But my kids got to have fun and spend a bunch of their saved up money, so all in all, I guess it was okay.

The lesson for other authors though, is that YOU DON'T SELL BOOKS AT COMIC BOOK CONVENTIONS. I've harped about this before, but my kids and a fellow author wanted me to do this show again so I relented. And I suppose the $19 spent on a Facebook add wouldn't have been very fruitful either. I ran one of those for $25 on Friday before the show and only sold 4 copies of my latest release--and that's about what I normally sell in the same period.

Posted by Troglodad at 7:20 PM No comments:

The West just got a lot Weirder: Outlaws of Olympus

Introducing a new chapter in the weird western: Outlaws of Olympus

This new series of short stories launching one every 4 weeks tells the tale of one heroic priest battling the monsters of the Old World in the Wild West.

Follow along as Father Sergio Ercole Morricone, and his cursed cavalryman partner, Bartholomew J. Black, track down and stop the greatest terrors ever unleashed in the modern age. From rampaging demigods out reap the souls of the damned to hideous beasts plucked from the oldest of mythologies, action and salvation ride hand in hand across the new frontier. 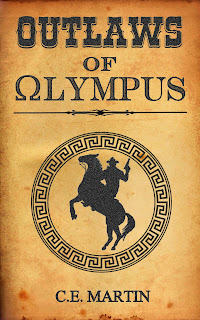 1881, Utah Territory. Immigrants continue to flood into the Wild West, bringing with them their customs, cultures, and legends from the Old World. But it isn't just men that have come to the new Frontier. Darker beings have come as well, intent on once more terrorizing mankind in a Godless land. Can a cursed cavalryman and a mysterious priest work together to stop a supernaturally-fast gunslinger, or will the old gods claim the land and souls of men for themselves?

Available on Kindle and in Print Now!

Posted by Troglodad at 6:27 PM No comments: 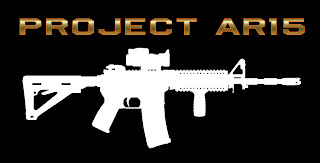 (Or, HOW I SPEND MY ROYALTIES)

Ah, royalties--the fruit of our writing labor as authors. At least, they should be. Sometimes you pour a lot of man-hours into a book and see almost no return. At the other end of the royalty spectrum, some folks make enough money to quit their day jobs, go on vacations, or buy big new houses. Most of us, however, are somewhere in the middle, making a decent amount of royalties, but not enough to support ourselves. Which begs the question--what do we do with that money?

Obviously, reinvestment is key in our self-published writing business. There's ads, new software, editing, cover fees, etc. etc. But you've got to have a little fun with your royalties. More than just a nice dinner out or a new movie for the collection. Something substantial...

Well, beginning this summer, I'm going to start on a new hobby that has intrigued me for months: the assembly of my very own AR15 rifle.

Why assembly? Well, yes, I could save up for a couple of months, or luck into a really good month and just buy one (AR15s can be anywhere from $600 up). But there's nothing special about that. Well, I mean not much. I did buy a handgun this winter with my royalties. That was fun. But now that I've been there and done that, I want something more. And what could be more satisfying than building my rifle, a piece at a time?

Oh, you meant, Why do I need an AR15?  Well, I don't particularly need one. 5.56mm ammo can penetrate concrete blocks, so I can't say it's for home defense--that's more the function of my newest handgun. I don't plan on the world ending either. Or jackbooted gubmint thugs raiding. Nope, the reason I want an AR15 is because I enjoy shooting them. I carried one when I was in the USAF and even qualified as a small arms expert with it.

But enough about me. Let's talk guns...

Yes, you can Johnny Cash an AR15 together one piece at a time. All but one part can even be purchased online and shipped to your door, oddly enough. That one remaining part is the lower receiver. It's the part the gubmint classifies as the rifle, requiring purchase at a licensed dealer and a background check. And as I'm a notorious cheapskate, I went with the lowest priced receiver I could find--a nice aluminum one produced by a company called Anderson, for $49.95. 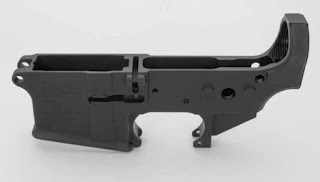 One piece down and... how many to go? 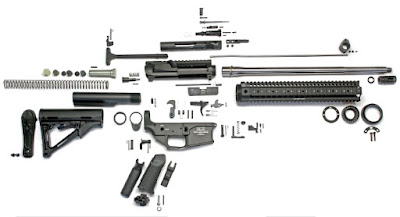 For this project, I've broken the parts into groups, and set myself a spending limit of $75 a month (or less if I have a particularly bad sales month). The groups are:

So thats what I'll be posting about every month. My royalty rifle--an AR15 purchased with royalties, and assembled bit by bit, as funds and time allow. And to wrap the project up, I'll take my new toy to the range and test it out. THAT is a good ending to a story...

What do you do with your royalities? Anything cool? Anything memorable? Let me know in the contents below. The best story will win some a free copy of a Stone Soldiers/Shadow Detachment book (Print for winner here in America, digital for those overseas).

And if you're interested in building your on AR15, check out this article in American Rifleman from the end of 2014.
Posted by Troglodad at 9:15 PM No comments: