EVOLUTION: A black and white issue?

Back during Barack Obama’s campaign, I noted in a cartoon the amazing similarity of Michelle Obama to the Geico cavemen. Having a rather caveman-shaped forehead myself, I felt this was fair game, and a funny way to work in yet another dig on Chairman Maobama. 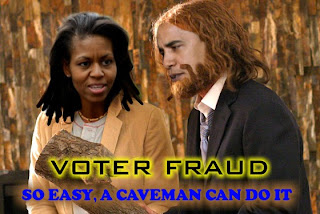 But I’ve been thinking- primarily about the cartoons I could have done. And I’ve had a stunning realization about Western society.
The Theory of Evolution really is just another way to keep the black man down.
See, all those nature-worshipping elitists that push Darwin and Lamark believe that mankind evolved from monkies. And that the first human was a skeleton found in Africa that has been named "Lucy". Lucy is a black woman. Ergo, mankind evolved from black women.
Now at first glance, a lot of black people- and I use the color-descriptive term as Africa isn’t just full of black people- might take pride in this scientific quackery. That their race is the first race. That they are the oldest, noblest progenitors of mankind. But that means that they are also the least evolved.
Remember that Lamark and Darwin came up with their heathen blasphemies about man’s origins in the 1800s, a time in world history when black men and women were deemed sub-human in the West. White, western men considered themselves the top of the food chain- their way of rationilizing centuries of slave trading.
For Europe, black men, and even native Americans, were not the same as "normal" men. The Spanish used the same rationale for justifying their invasion of the New World and forcing natives there to convert to Christianity.
Even "Evolution of Man" charts have the black man following apes, with white men following black men.
Does all this mean that Barack Obama was the less-evolved candidate? That America has chosen a primitive paleo-liberal as the next President? Maybe if you wear a pillow case over your head and like lighting crosses on fire.
Without getting all preachy, let me just close by expressing my sheer wonder that this hasn’t been noticed by the black caucuses and NAACP before. Not really surprising since they have sought reparations from the United States, rather than the African nations that originally placed modern Black Americans' ancestors into slavery then sold them (if anyone could afford reparations, surely it would be the oil rich countries of Africa and the middle east who historically are infamlous for slave trading).
No, it’s now little wonder to me that so many black children going through are heathen school systems grow up feeling as though they don’t fit in with the rest of society. Or that all the rich, liberal snobs’ children grow up thinking they are better and that blacks need money thrown at them. We're subliminally telling them they're little more than animals.
This whole personal discovery has led me to revile Darwin and Lamark even more than ever- something I never would have thought personal. Perhaps with a less evolved President we could make some true progress and do away with the racist teachings of Evolution and begin telling our children that all men truly are created equal- not evolved differently.
Posted by Troglodad at 10:19 AM No comments: