F@!#ED UP: The Career of Barbara Walters 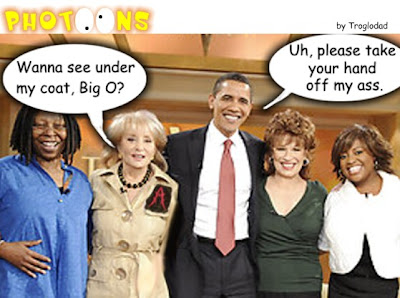 Okay, clearly, Barbara Wawa has lost her mind.
I always have disliked Scarlet Walters, from her haughty arrogance while interviewing people all the way through her clear hard-on for liberalism. But I never would have guessed how right I was about just how terrible a person she is.
Thank you Barbara, for revealing to the world how despicable you are.
I’m speaking, of course, of Wawa’s recent book, in which she revealed multiple affairs she’s had with men over the years. Worse still, these married men were Republicans! Gasp! Not only did she spread her legs for other womens' husbands, but she didn’t even go for the donkey show! Maybe she wanted to be able to truthfully say "Republicans have been screwing me for years!"
Ironic, considering the women she's derided for affairs over the years. Like Monica Lewinsky.
Funnier still is Wawa’s noted stance as a feminist. You know who feminists are, right? Those uptight broads who condemn women for sleeping their way to the top. Apparently, Wawa misunderstood the movement and stayed awake for all her debauchery. Yes, I'm inferring she slept her way to the top. I mean, why wouldn't she? She had no moral qualms about adulterating with multiple males. Are we really to believe she otherwise remained pure?
And, while I don’t relish hearing about some 78 year old hag's sexual exploits, it does explain a lot. Like her pass at Osama when he appeared on her show in March of this year. Or why she’s so enamored with Osama bin Muslim. But, Wawa better keep her mitts off Osama. And not just because she's old enough to be his grandma. Personally, I think Mrs. Obama could take her in fight.
At this point, I don’t think that Wawa can go any lower. At least not until we see her hawking Cialis on commercials;
"Ciawis; it wucks wonders on youw caweeh. Buy some today fo youw boss. You won’t wegwet it."
Still, I've found the silver lining in all this mess: at least there's no pictures. Ugh.
Posted by Troglodad at 11:33 AM